In honor of activist, Kimberly Jones*, whose empassioned and moving explanation of the historical underpinnings of the looting that is occuring during the nationwide and global “Black Lives Matter” uprisings, as well in acknowledgement of her concise and brilliant economic analogy to explain the frustration with the imbalance of power within the white supremacist founded land of freedom, Hasbro, Inc. is proud to present:

MONOPOLY™  Reloaded: The Historically Correct, Land of Opportunity, Home of the Brave,
American Dream, Kimberly Jones “How Can You Win” Edition of the classic Parker Brothers game! OBJECT: to become the wealthiest player through buying, renting and selling property while stymieing other players’ progress and manipulating the rules of the game at whim to your advantage.

How can you win? It’s easy! Just follow these simple rules:

BEFORE each game begins, all players–whether they wish to or not– must participate in the qualifying video game of “Crossfire” or “Manhunt 2*” (*labeled as possibly the most violent video game ever made and is infamous for being one of only four video games to have received an “Adults Only” rating due to violence, with the other three being The Punisher, Hatred, and Agony–wikipedia)

If the participants do not possess the above games (as they may actually be adults at this time), then they are free to use any sadistic, genocidal, homicidal, or gratuitously violent video game from their youth such as Thrill Kill (1998), Postal (1997), Doom (1993) or Mortal Kombat (1992). Whoever wins the qualifying game, gets awarded the “Silver Spoon” game piece, and is made the banker, the police force, the jailer, and judge (for inter-player disputes), and reserves the right to change any of the following rules of the game at his or her sole discretion. 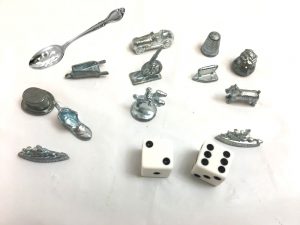 The player who eliminates the most participants BEFORE the game wins the “silver spoon” game piece and becomes the banker, judge, jury, police force and operator of the private jail.

Parker Brothers would like to make clear that each player must abide by  the same rule booklet, and everyone has the same opportunity and same potential to play and win. However, starting with the banker and for the first 10 rounds of the game, ONLY the banker shall roll the dice, move his/her silver spoon the displayed number of places and purchase any property at the “banker’s discount”–an amount to be determined by the banker.

Once the player who is banker has rolled and moved 10 times, then regular play may begin according to the following general rules:

If the player lands on Luxury Tax/Super Tax, he or she must pay the banker $100 (in some editions of the game, only $75).

If the player lands on Income Tax he or she must pay the banker either $200 or 10% of his or her total assets (cash on hand, property, houses and hotels).

If the player lands on a Chance or Community Chest, the player takes a card from the top of the respective pack and performs the instruction given on the card and/or any other hoop the banker determines is reasonable.

You land in jail when:

(1) Your token lands on the space marked “Go to Jail*”

(3) You throw doubles three times in succession (in other words, if you’re progressing too quickly through the game), or

(4) If the banker determines that your accumulated wealth rivals his/her own and wishes to take you out of the game.

*If the player lands on the Jail space, he or she is “Just Visiting,” and no penalty applies UNLESS the player has previously been sent to jail at which point he loses a turn and forfeits his property to the player who controls the bank.

NOTE: Please note that since the jail is privately owned, whenever ANY player is sent to jail, the player who is the banker receives a $200 bonus.

As everyone knows, the game of Monopoly can often run very long with no apparent winner after rounds and rounds of play. In our effort to maintain the historical and cultural accuracy of this updated edition, we’re suggesting the following variations of play:

If, at any time, the banker determines that the wealth of any competing player is a threat to his or her own, the banker may call “Sudden Death!” at which point whoever won the qualifying video game can simply level the competing players’ hotels and houses (sound effect of bulldozer or exploding bombs available in the Premium Edition), confiscate deeds and game pieces and declare him or herself the winner by virtue of superiority.

In the “Blind Trust” option, the banker erects a (typically white) sheet between him/herself and the competing players. Play proceeds exactly the same as during the regular version of the game, except that the banker (who is invisible to the other players on the other side of the sheet) rolls the dice on behalf of each player, announces what number was rolled, moves the player’s game piece on behalf of the player and then tells the player where they have landed and what they are entitled to. (Note: The “blind trust” option received a “most favorable” rating by our pre-release focus group)

In the “tilted playing field” option, one side of the game board is actually raised a few inches above the table so that the dice always roll towards the banker. While this tactic has not been scientifically proven to produce dice numbers that favor the banker, we believe the psychological effect of having the banker ALWAYS be the one who retrieves the dice and hand it to the next player has a cumulative depressing effect on the spirit and morale of the other players that will eventually accrue benefits to the banker.

So, with those modifications, we invite you to play and ENJOY THE GAME! BUT, WAIT, THERE’S MORE!

NEW! THE BRAND NEW 2020 “EQUALITY NOT REVENGE” EDITION OF MONOPOLY:

In addition to the updated classic edition, Parker Brothers is now pleased to announce a replacement edition:

This new edition of Monopoly aims to right the wrongs of the previous editions, provide a level playing board and make the game really fair for all while retaining the trademarked board and pieces and the role of central banker. However, at the present time, no such edition of Monopoly has been successfully produced because, according to our focus group feedback, “it’s just silly to try to play a different game using the same board design, pieces and underlying construct of an inherently biased game.”

However, Parker Brothers and Hasbro remain committed to bringing the world’s favorite game up to speed with a new generation and new paradigm. Please join our mailing list to be notified of our success!